This was YHC’s first Q in a few weeks and I signed myself up to do it a loooooong time ago.  It’s amazing how quickly these days come upon us…  see, I signed myself up because 01/13/18 would be a significant day for me and my family, so I decided to express the things on my heart the day before (more on that below).  But first the workout:

Selfishly I wanted to head over to Eagle’s Nest stomping ground since I don’t get to post there very often anymore.  We mosey’d over to Scholar’s Walk to do some high knees, butt kickers, karaoke, lunges then bear crawl.  The main event went as follows:  Start by doing 1 jump squat, then run to the other end of Scholar’s Walk, however, once you got halfway at the stairs you had to do 1 burpee.  Once you reached the end of Scholar’s Walk you had to do 1 Merkin, followed by 2 Jump Squats…. then run back to the other end of Scholar’s Walk, stopping in the middle for 2 burpees.  At the end you did 2 Merkins, then 3 Jump Squats.  We did this all the way up to 10 Jump Squats, 10 Burpees then 10 Merkins (Iron Sights made it to 11).

Next we had a short mosey over to the DiGiorgio Center where we did some people’s chair and balls to the wall.

Headed back to the COT for a total of 3 miles.  My goal was to NOT stop moving and I believe we accomplished that!

As mentioned above, I wanted to Q this workout because I had something I wanted to discuss.   As prideful men few subjects are more taboo to talk about than suicide.  It has touched me far too many times than I care to recall, but the one that still stings to this day happened over 10 years ago (which is still so hard for me to believe).  I come from a relatively small, tight (at least it used to be) family.  I was the only grandson on either side until my cousin came along when I was 13.  We had a pretty unique bond in that we were the only testosterone among all the cousins and I loved Caleb dearly…  January 13th, 2008, after coming home from church, my 14 year old cousin went into his bedroom, locked the door and shot himself with his rifle.  I can remember that day like it was yesterday… it was the most surreal, out of body experience I have ever had in my life.  To this day I am still sad I lost my little buddy, confused as to why such a young person can choose to do such a thing, mad at Caleb for being so selfish, but most of all I am mad at myself for not talking to him more.  Talking… that’s what this is about.  Set pride aside and reach out if you need to talk.  Check in on your friends if you know they are struggling.  Be proactive to insert yourself and be a positive person in someone’s life.  That’s the hardest part about dealing with the aftershocks of suicide; knowing you could have done something that could have put a seed of doubt that could have prevented such a “permanent solution to temporary problems”.  Please know that I, along with any other PAX will do anything in our power to help you out if you’re struggling.  We’re all broken men, trying to get through the day a better person then how we started it.

Here are a few facts about suicide:

Psalm 34:18-19        18 The Lord is close to the brokenhearted and saves those who are crushed in spirit.19 The righteous person may have many troubles, but the Lord delivers him from them all;

The Rooster (buy a shirt).  Read your newsletter.  Train for P200

Herbie and his family as his wife went for her biopsy, and as they await results.  Big House and his mother.  Also for Iron Sights in response to the message above.

Love you guys.  Sorry for the rambling.  Blueprint out. 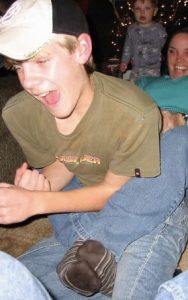